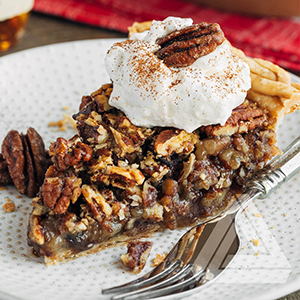 Who doesn't love a Pecan Pie? Well, we took that concept and made it a pudding pie. It's rich, nutty, creamy, and delicious! See the full Episode and flavor notes at https://youtu.be/DX_j86gX4JI . This is a simple grape candy. Grape is one of my white whales. For a single flavor, it's not all that easy to get right. FLV Grape is very bright and punchy and would make it into a grape candy, all flavorah challenge or not. I might adjust the candy roll, but I'm not sure yet. Please feel free to leave any feedback :)

Inspired by developed apple butter recipe using all Flavorah for the flavorah giveaway.

Sweetened Eggnog with Yam.
Very special mix, not convenient for everyone.

Sweetened Yogurt with Eggnog.
Very special mix, not convenient for everyone. Hobbit's snack, the tale of a muffin, a journey through Flavorah Land.
The base here is lembas bread and popcorn. At 1.3% it's just the right amount to shine and popcorn is here to add a little bit of butter and a tiny bit of texture. I use jammy berry as a dark fruit base(at 0.3% it's not too syrupy) and add a combination of three brighter fruit( peach, persimmon and cranberry) to lighten jammy berry and add a fresh and sweet fruitiness. Sweetness is a little bit high at .8% but I wanted to make a " fun to eat muffin" not a diet one....allow 5 to 7 days for lembas bread to show up nicely and to jammy berry to calm down. Enjoy! This is a lighter tobacco mix with some coffee and a little bit of a dark chocolate floatin around in there. It's a recipe I've wanted to make for a long time, and was for some reason much more successful being limited to just one flavor company. I initially mixed this for a MTL setup, but I know most people mainly use a dripper or higher wattage device, so that's how I developed the profile. I also included the MTL version at the bottom of the description in case that's the way you vape. I personally get a Off The Record Raw Power kind of vibe from this, which I wasn't going for but turned out to be very similar. This one definitely has to steep for about 3 days to let biscotti calm down a little bit. That guy is big mad.

FLV Tatanka: One of my favorite tobaccos from flavorah to use in dessert mixes. It has a light tobacco with a good amount of caramel, its the closest tobacco to an ry4 from them imo.

FLV Red Burley: Just threw some of this in there to boost the tobacco a bit. It also helps out the chocolate/coffee aspect too.

FLV Mocha: Used to boost the coffee/chocolate and add a cream to the mix. The cream more so shows up in a MTL setup.

FLV Smoked Butterscotch: Just to add a bit of butt scotch. When I originally mixed this it wasn't included, but when I tried this in a dripper I felt like it needed it.

FLV Sweetness: My favorite sweetener to use with dessert tobacco mixes now thanks to Developed. It sweetens everything else up without touching the tobacco.

If you wanted some more of a nutty tobacco in here, swap red burley for FLV Oriental Tobacco at the same %, that stuffs delicious. You could also boost the tobaccos as much as you want and the coffee/chocolate will still stay pretty present. I also noticed in the first couple of versions that more sweetener would bring out more chocolate as opposed to coffee.

MTL Version:
Biscotti same percentage
Tatanka same percentage
Mocha @ 1%
Sweetness same percentage
Red Burley bumped up to 1.5, unless you want a light tobacco
Take out smoked butterscotch, as it muddles the profile in MTL. It doesn't normally do that imo, but in this recipe I noticed it.

A huge thanks to Developed and Flavorah for hosting this awesome challenge! My rendition of a Watermelon and Strawberry bubblegum- less is more.

FLV Bubble gum: versatile and non-intrusive pink bubblegum that won't bully the watermelon and strawberry. it's slightly chalky and so we use this relatively low.
FLV Watermelon: Perfect balance of authentic and candied watermelon with watery undertones that will help combat some of the chalkiness in the bubblegum and give that mouth-watering experience
FLV Strawberry: this is a versatile with a good balance of the authentic fruit with light candy syrup tones. slightly floral but this serves this particular recipe well as it gives that just-opened-a-packet-of-gum smell which is perfect for this recipe - we going for a candy profile after all
FLV Sweetness: Its a candy and although the watermelon and strawberry is relatively sweet already we are just going to bump it a tad, for me FLV sweetness gets stronger on the steep, so we will use it in moderation
FLV Lemon: just to sharpen the profile a bit and mask some of the artificial tones in the sweetner