This is a perfectly balanced blend of Forest Fruits and Honeydew Melon with a Vanilla cream background.
Tested on a Wotofo Profile 1.5 RDA with 0.2ohm Mesh at 75w.
This is a little unbalanced after a shake with everything coming together after 7 days, it just becomes creamier with the fruit notes remaining upfront the longer it's left. 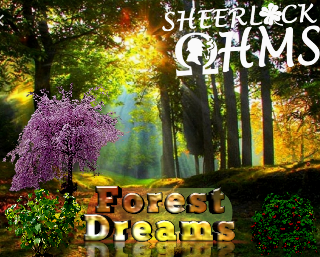 FA Forest Fruits is my go to blend to use when I want a blackcurrant forward forest fruit mix used at 3% here to give a beautiful blackcurrant with mixed berries iimcludong Cherries and Raspberry, in the background, I tried using it higher but I ended up losing the balance of fruits I wanted at this % it plays wonderfully with the authentic, juicy and sweet HoneyDew Melon from Jungle Flavours at 1.5% this sits just in the background of the forest fruits without being harsh or overpowering.

My Vanilla Cream background consists of LB Vanilla Ice Cream at 4% to give a buttery and thick Ice Cream, for me the Vanilla in this needs some enhancement as well as it being a little 'flat' on it's own, VT Vanilla Cream at 1.5% fills in that role enhancing the creaminess of the LB with it's sweet cream like body and it's slightly dark vanilla tones. Finally VT Vanilla buttercream frosting adds the 3d edge with sweetening up the ice cream and adding a little more depth to the vanilla. These were the words floating in my mind soup as I crafted this delectable masterpiece.

FA Aurora - This one here imparts a sharp, sweet, fresh-squeezed lime note near the top. It's very versatile and should be in everyone's stash.

JF Honeydew Melon - The king of honeydews and just incredibly complex and amazing on its own.

FA Lavender - To activate your throat chakra and speak your inner truth.

This has almost entirely replaced Grack Juice as my primary addiction. I hope you enjoy and I'd love to hear your reviews. This is a Honeydew infused green tea milk, with boba (tapioca pearls). Big shoutout and thanks to @AlfredPudding (aka Malfred Puddage) for the majority of the inspiration for this mix and @Eyemakepizza for helping hammer out the percentages.

This is a slightly sour/tart and sweetly delicious jolly rancher/gummy type watermelon vape.

CAP 27 Bears at a higher percentage to really hammer the fact that this is a Candy first and foremost
The WF Sour Watermelon Candy is one of my new favorite watermelon flavors and brings most of that melony jolly rancher taste here.
The JF Honeydew and FLV Wild Melon are tossed in to back up some of the melon notes and help you not forget that this is a straight up, punch you in the face watermelon flavor.
WF Sour Gummy Candy to give it a bit more of that tart/sour candy vibe.
The perfect watermelon vape has been my white whale for quite some time, but this is pretty close to what I’ve been searching for all this time.
I also added 0.25% CAP Super Sweet to give a bit of that “sugar lip” but it’s totally optional as this is plenty sweet on its own.

This is my first posted recipe on ATF and is still a work in progress, but let me know what you think so far. Thanks! Ok here we go. This one is a nice refreshing summer drink vape.

FA Pear is used really for sweetness to go along with the FLV Wild Melon/JF Honeydew combo to give us a honeydew forward melon mix.

Finally the FLV Boysenberry helps to syrup up the fruits and add a touch of berry to the mix. Enjoy! Bang-on for those little melon gum balls from the sushi joint. The only difference is that this won't lose it's flavor after 60 seconds.

I wanted to try and modify the recipe to use honeydew instead. I also messed around slightly with the grainy notes to hopefully counteract FE sticky rice's shortcomings after a steep.

Shake and vape - this one seems like it isn't the best for shake and vape. I was actually kind of disappointed when I first tried it after mixing. It was very evident that the flavors weren't meshing together nicely.

3 day steep - whew, it's crazy what a few days steep can do for a juice. It is tasting a hell of a lot better now. Basically how you would imagine shyndos mango sticky rice would taste but with honeydew. Might wanna change the coconut notes around and maybe add in some tfa coconut candy. Honeydew notes might be a bit on the stronger side, i personally enjoy it like this, but maybe JF honeydew melon could be lowered slightly. Will probably come out with a v2 of this recipe idea. Took the melon tea idea from Wayne, and adding FLV black tea from another user...I can't remember though. I think it was called paradise - I loved the idea and I had 100ml of JF Honeydew that I couldn't manage to use. Turned out I was using it way too low. Here's what happened. In my home city we have a very eclectic group of people. It's legitimately a melting pot of all cultures. I was fortunate enough to be exposed to all sorts of different foods growing up, and one of my favorite things to do was to go to different ethnic grocery stores with my mother. There was one store in particular that always had me very excited, and it wasn't really a store. It was basically a giant warehouse, with tons of different little shops smashed into it. This place was called Mitsuwa. A Japaense Marketplace.
Particulary, my favorite place in the market was the candy aisle. I could not read japanese but the packaging was brilliant. It was a surprise every time I chose something new. My absolute, hands down, favorite candy of all time from Mitsuwa, was a Honeydew Shake Candy called Milkita. It was almost like a Honeydew Taffy, emphasis on the milk. Here is my rendition of it, which I am happy to say has exceeded my expectations in wanting to re-create that nostalgic taste.

JF Honeydew Melon - Pretty much the standard when it comes to delicious Honeydew Melon flavors. They knocked it out of the park with this one. It's a sweet and fresh melon flavor thats pretty potent too. It does mellow out over time, so thats why I accented it with the even more potent TFA Honeydew. In conjunction with eachother these two really drive home that sweet, green, melon flavor that so reminds me of those little chewy Milkita candies. I also get a creaminess out of these two, as I do with most melon flavors, which plays nicely with our other ingredients and overall goal for the recipe.
FLV Cantaloupe - This stuff tastes fairly authentic to me. Its a natural, ripe, sweet cantaloupe that plays right into the melon profile and helps accentuate the body of that fruity creaminess.
FA Coconut - This was what I was missing from my earliest versions. Just a touch here helps bring some more milkiness, pumps up the sweetness level, and acts as a bridge between the fruits and creams. I was super excited when I started using this and it worked so well.
FLV Cream - Bring on the creaminess. This has a dairy taste, but not as agressive as FA Fresh Cream or ooo Cream - Milky Undertones. I was originally using TFA Marshmallow to bring some body and sweetness, but it seemed overbearing. FLV Cream brought some great body, mouthfeel, a reasonable amount of dairy, and also helped the richness of the recipe. Its thick. More like a heavy whipping cream than a milk that plays well with the fruits.
ooo Cream - Milky Undertones - This is flavoring has been a godsend. It's milk with a touch of sweetness. No-nonsense here. Its fluffy, which helps emulate the candy aspect of the source material and worked exactly as intended.
FA Meringue - Sugary sprinkled sweetness. Helps in the cream department making things milkier, helps in the sweetness department delivering that accurate candy profile.
Thats about it.